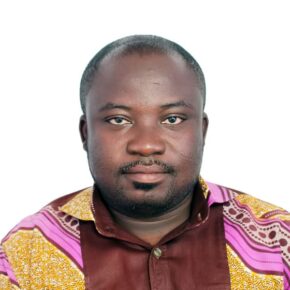 Leonard Opoku Agyemang is a researcher at the Akrofi-Christaller Institute of Theology, Mission and Culture, Akropong-Akuapem in the Eastern region of Ghana. In 2015, he received an invitation to deliver a paper at the international cocoa conference on ‘Christian Mission, Cocoa and Socio-Economic, Political and Religious Change in Ghana’ held at Akrofi-Christaller Institute of Theology, Mission and Culture (ACI) Akropong-Akuapem on 20 and 21 October 2015. The conference was organized as part of the commemoration of the 200th anniversary of the Basel Mission in Ghana.  The paper which was later published in the edited volume, Robert Addo-Fening & Allison M. Howell, (eds.), The ‘Golden Pod’: Its Religious, Socio-Economic and Political Impact on the Gold Coast and Ghana (Akropong-Akuapem: Regnum Africa, 2018), focuses on the cocoa life of his late father, Akosa Bruku Adjapong, (1939-2011). From the conference proceedings, he learnt that the cocoa industry in the Gold Coast and later Ghana was not simply an agricultural phenomenon. It was linked to religion, Christian mission, education, economics, politics, social integration and nation-building. From the conference, he felt the need for further research in the religious and Christian dimensions of cocoa production in Ghana. The Institute sought funding for this research project in 2018. The project involves both archival and field research. Leonard has travelled to almost all the cocoa growing regions in Southern Ghana to conduct extensive field research during which he interacted with the stakeholders in the cocoa industry, including farmers, traditional and church leaders. As a son of a cocoa farmer, he spent his childhood years in a rural cocoa farming community in the Bono region of Ghana.