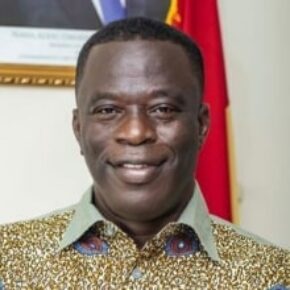 Hon. Ignatius Baffour Awuah assumed duty as the Minister for Employment and Labour Relations on 13th February 2017. He is the Member of Parliament (MP) for the Sunyani West Constituency, having been elected in 2008, 2012 and 2016 He has been a Cabinet Minister from 2017.

The Hon. Minister was born on 24th August 1966 in Nsoatre in the Brong Ahafo Region of Ghana (now Bono Region). He attended St Patrick’s Primary school from 1973 to 1981, then Sacred Heart Secondary School until 1983. The Hon. Minister continued with his studies at the Sunyani Secondary School and St Hubert Seminary where he received his GCE ‘O’ Level and ‘A’ Level certificates respectively.

In 1992 Hon. Baffour Awuah obtained a Bachelor of Science (BSc) Degree in Business Administration (Accounting option) from the University of Ghana Business School, Legon. He also holds a certificate in Civil Service Management from Galilee College of Israel and a Post Graduate Diploma from the International Professional Managers Association (IPMA) in the United Kingdom. He is currently a fellow of the IPMA-UK.

Hon Baffour Awuah started his career as an Accountant working with the European Union funded Micro-projects in Atebubu. He then worked as a management trainee and eventually became the Operations Manager for Nsotreman Rural Bank.

In 2001, he made his official entrance into local politics being appointed as the District Chief Executive (DCE) for the Sunyani District Assembly. He served as the DCE for four years before becoming the Deputy Regional Minister of the Brong Ahafo Region in 2005 and later in 2006 -2008 he was made the substantive Regional Minister.

As a member of the Ghana Association of Rural Banks, the Hon. Minister was the Secretary of the Brong Ahafo Managers Group. In 2004, he became the Expansion Committee Chairman for the Catholic Organisation for Social and Religious Advancement (COSRA) a position he still holds.

Since becoming an MP, Hon. Baffour Awuah has served as the Deputy Ranking Member for the Finance Committee (2009 – 2013) and as the 2nd Deputy Minority Whip of Parliament (2013 – 2017). He has also served on the following Parliamentary Committees: Committee on Selection, Environment Science and Technology Committee and the Local Government Committee. In 2017, he was appointed as a Commissioner of the National Development Planning Commission of Ghana.