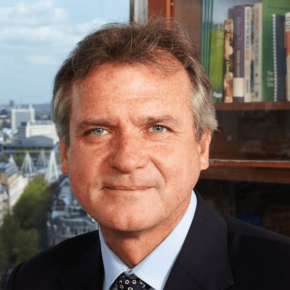 He has over 30 years of board-level experience in cocoa after starting his career at Holco Trading Company (part of ED&F Man) in 1983. While there, he held Directorships in the UK, Poland, and Malaysia, and was involved in managing the product trading operations, including significant responsibility for processing operations.

Gerry then joined Olam Group (now ofi) in the Singapore headquarters in 1998, commencing a 24-year career in the company. In 2003 he returned to the U.K. where he went on to establish the Group’s European operations. He now sits on the senior leadership team based in London.

He is an active member of several industry boards, including the European Cocoa Association and the World Cocoa Foundation. Latterly, he was also Chairman of the Federation of Cocoa Commerce and served on the boards of the Cocoa Association of Asia and the London Cocoa Terminal Market.

Gerry has an MBA from City University in London and a bachelor’s degree with Honors in Geography. In his spare time, he is a trustee/board member of Royal Trinity Hospice and is a keen supporter of Rosslyn Park FC (rugby) and Everton FC. He is married with three children and lives in London.