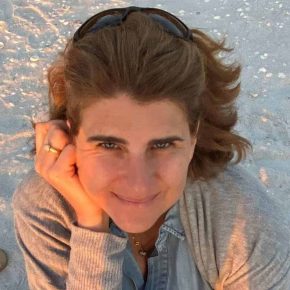 Charlotte Grant serves as Senior Communications Manager at the World Cocoa Foundation, where she is responsible for building WCF’s brand and position as a thought leader in support of a sustainable and thriving global chocolate and cocoa sector. She brings to this role 15 years of international experience acquired across four continents, working for government organizations, nonprofits, and private sector companies. Charlotte is notably in charge of coordinating the WCF Partnership Meeting, our annual flagship event, and is the point person on all things WorldCocoa.org.

Before joining WCF, Charlotte was Digital Communications & Events Manager at the Embassy of the Kingdom of Belgium to the United States (2014-2017). In this role, she ran the Embassy’s social media strategy, acted as de-facto cultural outreach officer, and managed large public events such as the annual Open House, as well as high-level thought leadership events. Charlotte worked directly with the Ambassador and spearheaded projects with key stakeholders such as the European Union Delegation to the United States, The World Bank, the Smithsonian Institution and more.

When living in Australia, she was elected and reelected as President (2010-2012) of a community organization, leading and recruiting a large group of volunteers to execute an ambitious agenda for the association. Before that, Charlotte was based in Singapore and worked as Communications Manager (2006-2009) for a fast-developing non-profit theatre company, obtaining unmatched media coverage for artists and new shows. At the same time, she oversaw Singapore’s first French-language magazine as Editor-in-Chief (2005-2009), managing a team of up to 30 volunteers. Charlotte started her career in Paris, France, as a public relations consultant (2000-2004) and helped global companies such as the GDS Amadeus or online bank egg (Prudential group) manage their relations with the financial, business and trade media.

A French and British citizen, Charlotte is fluent in both languages, and has notions of Dutch, Spanish and German. She was the winner of the 2020 World Cocoa Foundation bake off.

Scary Chocolate Stories? Get the Facts Before Halloween

After a 2020 trick or treating season spoilt by pandemic restrictions, children around the United States are looking forward to… Read More

In The News June 16, 2021
By: Charlotte Grant
Empowered Communities

Chocolate Is For Easter. Five Reasons Why It’s Also Forever

If, like me, you are a chocolate lover, chances are that your heart often sinks when you see click bait… Read More

The Power of We: Convening for Cocoa Sustainability in Disruptive Times

At this time last year, my colleagues and I were at the office savoring delicious chocolate bars that I had… Read More

Why Chocolate is Forever: Four Ways We’re Working for the Future of Cocoa

If, like me, you are a chocolate lover, chances are that your heart has sunk more than once since 2013,… Read More

On a recent visit to Côte d’Ivoire, I met Ediko Appo Agnès. Agnès invited me to her cocoa farm and… Read More

Your 5-Minute Guide to Sustainable Cocoa

Did you ever wonder who grows the cocoa beans used to make your chocolate? Six million farmers around the world… Read More

The 2018 World Cocoa Foundation Partnership Meeting wrapped up less than a month ago. It was made possible by the… Read More