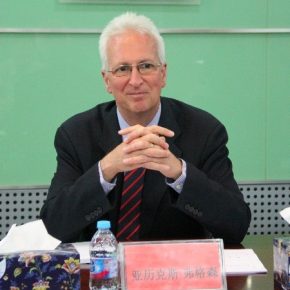 Alexander Ferguson is WCF’s Vice President for Communications and Membership based in the Washington, DC office.

He is responsible for global communications efforts to media, donors, governments and other key stakeholders, and manages reputational risks on behalf of the chocolate and cocoa industry. Alex also drives WCF’s efforts to recruit new members and retain existing ones. He is in charge of WCF’s annual Partnership Meeting, the only industry-led global conference on cocoa sustainability.

Alex, who has American and British citizenship, brings more than 30 years of professional experience from international development, journalism, financial publishing, and the automobile industry.

For 14 years, Alex worked at the World Bank in a variety of leadership positions, including Senior Manager for External Affairs for South Asia, Chief of Staff and Communications Advisor for World Bank President Robert Zoellick, and Senior Communications Officer to the Chief Financial Officer. Prior to the World Bank, he worked for 18 years at Reuters, including as the News Editor and Economics Editor in Washington, and earlier as a correspondent in Africa, the Middle East, United Kingdom, and Germany. He also worked as News Editor for Euromoney Publications and was a Management Trainee at Mercedes-Benz.

Alex is an Olympic-distance triathlete in his spare time.

Germany traces the origins of sustainability efforts in its cocoa and chocolate industry back to the 19th century. It was… Read More