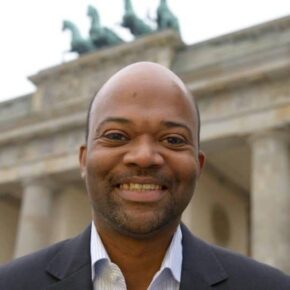 Alex Assanvo Heads Ivory Coast And Ghana Cocoa Initiative. The cooperation on cocoa that commenced in 2017, between presidents of the two countries, led to the introduction of the $400-per-tonne Living Income Differential (LID) in 2019 to tackle extreme cocoa farmer poverty.

Until his appointment as the first-ever Executive Secretary of the Initiative Cacao Côte d’Ivoire-Ghana (ICCIG), Alex was the Director of Corporate Affairs for Europe and Africa at Mars Inc. He kicked off his international development career with the German development agency, GIZ, between 2002 and 2006 in Dakar, Senegal, as a Rural Development expert. An assignment that gave him brief stints in Guinea, Guinea-Bissau, Benin, Sierra Leone, Ivory Coast, Burkina Faso, Mali and Togo, Alex primarily led GIZ’s West Africa multilateral programs of resource mobilisations for relief operations notably with AfDB, World Bank, UN funds. He also acted as a link between field officers and GIZ headquarters in Eschborn, Germany.

He would move on in 2006 to Fairtrade Labelling International (FLO), in Germany, where he took on the position as Head for Africa and the Strategic Lead for Cocoa and cotton. Stationed in Bonn, he among other responsibilities worked to facilitate awareness and establish relationships with chocolate and Cotton companies to further build their sustainability commitments.

After over 5 years interfacing with chocolate companies at FLO, he left to join the sustainability team at Kraft Foods, now Mondelēz International, in October 2011, as its Cocoa Development Manager based in Zürich, Switzerland. It was in this role that he participated in several key industry association taskforce or committees, e.g the CEN process which is the EU process to develop a sustainable and traceable cocoa norm, and also engaged with donors, government authorities, international organizations and traders in relation to sustainable sourcing program in West Africa.

He joined Mars Incorporated in October 2013. For the seven and half years that he was with Mars, Alex has served in various roles including Manager Global Programs and Partnerships (2013 – 2016), and Director International Government Relations (2016 – 2017). Alex was the Director of Corporate Affairs, Cocoa, for Mars Wrigley Confectionery, before accepting the appointment to head Initiative Cacao Côte d’Ivoire – Ghana (ICCIG) as the first Executive Secretary.