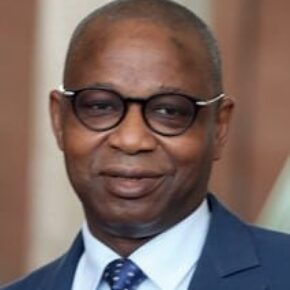 Adama Kamara holds a Master’s degree in business law (1990), a Bachelor’s degree in private law from the University of Abidjan Cocody (1989), and a Certificate of Aptitude for the Profession of Lawyers ( CAPA) obtained in 1991.

A lawyer specializing in business law, Adama Kamara has carried out missions for the Ivorian State in Côte d’Ivoire, as well as before international courts and arbitrations.

His functions at the Primature, where he had a transversal mission, led him to work on files in a wide variety of fields. As a result, it has developed expertise in various sectors: mining, electricity, oil, sanitation, transport, health, employment, social protection, etc.
Adama Kamara is appointed Minister of Employment and Social Protection in the government of Prime Minister Patrick Achi on April 6, 2021.

At the political level, Adama Kamara was elected deputy of Odienné commune on behalf of the RHDP, in March 2021.

Born on December 17, 1964 in Abidjan, Adama Kamara is an Officer of the National Order of Côte d’Ivoire.

Adama KAMARA was made Commander in the Order of Merit of the Public Service on June 24, 2021.