He never went to school.

Instead, N’Dri Kouadio Pascal moved around the cocoa farms of Côte d’Ivoire, the world’s leading cocoa-producing country. “When I was a child, both my parents were dead, so I grew up here and there,” he said of the only life he has ever known.

Decades later, the father of 17 now farms his own 23-hectare plot in Toinié in southwest Côte d’Ivoire. The older children are grown, and one of his three wives has passed away, but he still grows the cocoa beans to support his family.

Whatever hardship he faced in his past, Pascal smiles easily today. His bright shirt adorned with bee’s nests and butterflies matches the colors of the dress worn by his youngest child, 9-year-old Bénédicte. They hold hands as they stand in front of a sign for the Société Cooperative de Agriculteurs de Norbert Carrefour that promotes good health, education and agriculture practices where they live.

Pascal credits assistance and training he received through the cooperative in recent years for helping to increase his production. “Before I was harvesting three bags and now, I’m doing about 20 bags,” he said. That means more money so he can send his younger children to school. Unlike his own childhood, the youngsters don’t have to help spray the trees with insecticides, carry heavy loads, break the pods or face other risks associated with cocoa farming.

Ending child labor on cocoa farms, which is still too common, is a goal of the industry that provides the core ingredient for the world’s chocolate. Boosting farmer income is central to this goal and industry efforts are also focusing on improving education for children, supporting health and nutrition, and expanding child protection services. For Pascal, the training he gets helps him grow cocoa that pays for his children’s education, so they have better opportunities than he did as a child laborer.

They also received help in educating their children, including construction of a new local school that Bénédicte attends. “The stationery, bags, uniforms, everything was free, and it pleased me,” Pascal said. The training emphasized that children belonged in the classroom, not on the cocoa farms. Pascal said his children would be welcome to work with him someday, but for now, he made clear which he prefers, saying: “The school is better.” For help on the farm, he hires local workers for an agreed price “and at each harvest, I pay.” 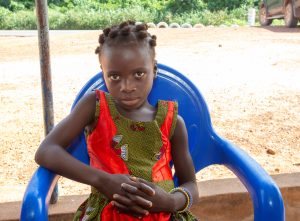 The cocoa he produces is used in chocolate products sold all over the world, and Pascal hopes the demand will grow to help him and his family. “We want an increase in the price of cocoa to be able to meet the needs of our children,” he said. He is grateful to be able to provide them with more than he had growing up, such as Bénédicte learning at the new school.

Sitting beside her on chairs outside the cooperative, Pascal’s deep-set eyes lit up and a gap-toothed smile filled his face as he declared, “I am so happy.” Being a cocoa farmer is “a good thing,” he said, because “you can take care of your children with that.”

Child Labor Has No Place in the Cocoa Supply Chain

On a recent visit to Côte d’Ivoire, I met Ediko Appo Agnès. Agnès invited me to her cocoa farm and… Read More

Our Resolution for 2020: Faster Progress on Cocoa Sustainability

Many of us will have indulged our sweet tooth over the holiday season and so, as the year begins,… Read More